Today officially marks three weeks since I have been in a car.  Over this time span, I have biked 313.4 miles, bussed 50.4 miles and walked 18.9 miles.  The surprising thing I have learned during the course of this experiment is that it isn't the long trips that turn me into a cranky complaining mess.  Instead, it's the short little errands that are killing me.  I don't have a problem getting up early and riding into work or heading downtown for happy hour, but a quick trip to the liquor store or the bank seems like an incredible hassle.  Most likely it's a matter of perspective.  When going to work, I know I am going to be there for eight hours so an extra 25 minutes getting there isn't a psychological hurdle.  However, a five minute beer run turning into a 30 minute struggle has a tendency to (at best) make me grumble or (at worst) make me convince myself that I don't need beer as I have a five year old bottle of tequila and a nine year old bottle of creme de cacao in the basement and there surely must be a cocktail combining the two (there isn't).

So, anyways, with 10 days left, my biggest internal question is what happens then?  Will I continue to be less reliant on a car or will I slip back into old habits of automatically grabbing the car keys whether I am going to work or to the next door neighbor's house?  I honestly don't know the answer.  I'd like to think I will find a happy, healthy balance between the two, but I tend to work at extremes.  Meanwhile, some random thoughts:

- SWASS season is most definitely upon us.  I'll let your imagination run wild with that.

- Last Thursday was nearly a flusher.  I had taken the day off of work as Audrey was swimming in the State Synchro meet.  As she swam at 1:45, my plan was to enjoy my morning farting around at home before pedaling down to the U of M about noon.  A simple plan, but I don't work so well when things are that open-ended.  As I've mentioned before, I thrive on strict, orderly schedules.  I would be an amazing train conductor in Germany.  Occasionally, however, I will try to ease up and let things just happen.  So, I read for a while, watched Troll Hunter on Netflix (highly recommended), made myself some eggs and consciously avoided looking at a clock.  Finally, convinced the time to leave was near, I pedaled to the bank to grab some cash for the day.  It was on this 1.5 mile journey that I realized that I had made a mistake.  The wind was whipping at a good clip straight from the North meaning that the way to the U would be downhill and with the wind at my back but the uphill trek home would be an absolute bitch.  I quickly changed plans and checked a bus schedule.  I had six minutes to make it about 1/2 mile to the bus stop.  I sprinted out the door,  making it to the stop in time.  While catching my breath, however, I reached into my pocket to grab bus fare and quickly realized that I had only $20 bills.  So, I ran across the street to a gas station to get change.  Because I always feel like an ass asking for change without making a purchase, I decided to grab some candy.  I rushed into the candy aisle, picked up my usual Gobstoppers and headed for the register.  At the end of the candy aisle, however, a bright purple pack of Jolly Joes caught my eye.  I froze.  I was hopelessly stuck, unable to make the simplest decision on what kind of candy to buy.  Three minutes later, I let out a small whimper as I saw my bus go by while I was still holding two boxes of candy, completely unable to make a decision.  Now I had to wait for the next bus, arriving in 30 minutes.  I would still make it on time to see Audrey swim, but it would be much closer.

In the meantime, I texted KT of my fate, whereas she made it a point to drive by the bus stop on her way to the U, honk at me and give me the finger.  I began reading my book while waiting for the bus, and continued to do so once I boarded.  I became so engrossed, in fact, that I completely tuned out where the bus was.  When seemingly everyone began getting off the bus, I naturally assumed I was at my stop (why wouldn't everyone be going the same place as I?) and hopped off the bus, never taking my eyes off my book as I was only two pages from a chapter break.  Once the bus pulled away, I finally checked out my surroundings and realized I had exited the bus several stops early.  Now I was in trouble.  I had a couple of miles to go and not nearly enough time to get there.  Shit.  As I was about to abandon hope and plan my apology/excuse to Audrey, KT and my parents who had come to watch, the heavens finally smiled upon me.  A block away I noticed a Nice Ride bike rental station.  I sprinted over, easily and quickly rented a bike and pedaled like hell towards the U.  As luck would have it, there was another Nice Ride station right outside of the Aquatic Center, meaning I could pedal almost to the front door.  I did so, slipping in to watch Audrey swim with three minutes to spare.  Needless to say, I have become a fan of the Nice Ride program.

- One of the great things about so much bike riding is the chance to appreciate nature.  Oh Mother Nature, how I love thee 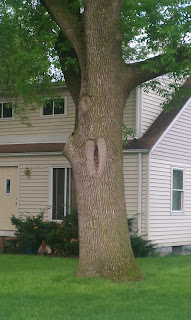 - As I've mentioned earlier, we ditched cable in our house a few weeks back.  This wasn't an easy decision, as KT has never been shy about proclaiming her one true love to be television.  Regardless, we took the leap and I hauled all of our equipment in.  One day last week, we received a large box in the mail from Comcast.  Perplexed, I opened it to find a cable box.  As we had clearly just canceled our cable and returned our equipment, I was more than a little bit peeved.  I got on the phone ready to raise holy hell.  The very patient and kind representative informed me that because we had kept Comcast for our internet service, we were automatically entitled to one cable box at no additional charge, and that we would receive on demand services and a limited number of channels for free.  I was skeptical, but satisfied.  KT, on the other hand, was over the moon.  As she put it, "I loved cable so hard that I had to set it free.  But like any true love story, it returned to me."  Hard to argue with that logic.  At least until yesterday, when we got a terse letter from Comcast explaining that since we have canceled our cable service, we have exactly 14 days to return all of our cable equipment to them.  I give up.

- One more bike story:  Wednesday night I went downtown straight from work to meet my brother for his birthday.  We decided to roll the dice with the impending storms and scalp tickets for the Twins game.  It was a good decision as the storms held off and we got quality seats for a great price.  When the game finished, thunder and lightning were getting nearer so I quickly said goodbye and headed for home.  About halfway home, the thunder and lightning was becoming pretty close and was quite spectacular so I decided to stop and try to grab a photo or two as it wasn't raining yet.  In retrospect, I should have heeded the words of the great philosopher Stevie Nicks who penned "Thunder only happens when it's raining".  No sooner had I pulled out my phone to snap some photos when all hell broke loose.  I was instantly drenched and being blown in every direction but home.  After a few seconds of panic, I soldiered on.  By the time I neared home, I actually was able to enjoy the moment, realizing in awe how rare of an occasion it is to be able to have a first hand experience of a powerful storm.  Okay, I'm full of shit.  It sucked.

- Finally, dear old Maggie, our beloved lab is 12 years old this summer.  She has a giant growth on one side of her body, a mangled pus-ridden leg that she obsessively licks, cloudy eyes and severe flatulence.  And, we love her more than ever.  As walks have become too much of a burden for her, we have substituted simply sitting in the front yard with her as our nightly activity.   Each evening, she picks a spot in our flower bed and digs a little deeper and a little wider into the earth.  When she has worn herself out, she plops down in her ever deepening hole and takes a monster nap.  Maggie has never been an obsessive digger, which makes her behavior all the stranger.  The only logical conclusion KT and I can come up with is she is digging her own grave, preparing to take one final dirt nap.  I guess there are worse ways to go. 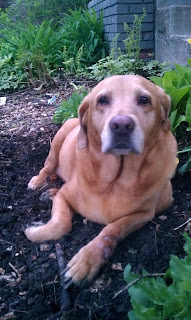