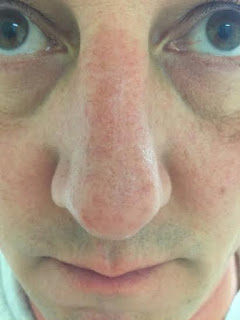 I have, in the course of my 45 years, managed to break my nose as many as seven times.  I say "as many as" because I've only endeavored to see a doctor about it twice.  Two incredibly expensive and draining septorhinoplasty surgeries have convinced me that perhaps my nose is just meant to be perpetually broken and I shouldn't fight nature.  Kate has actually forbidden me to have the surgery again unless I a) sign a waiver guaranteeing to never play basketball again and b) find someone else to transport my impossibly cranky ass home from the surgery and to my follow up appointments.  So, instead, I have learned to live life with my mouth slightly ajar as my septum is deviated to the point that one side of my nose is completely blocked, making the intake of oxygen through my mouth a requirement.

I don't remember the details of each break, but I'll share a few of the more memorable ones.  In the interest of keeping the stories shorter and Facebook friendly, I'll separate them in different posts.

As a sixth grader, I was a scrawny child.  Not just skinny, but scrawny.  Those who have known me only as an adult may (justifiably) be skeptical, but it's true.  I was the kid in gym class who was struggling bench pressing the bar only while the other kids - boys and girls - were pushing up twice the weight I was.  It was one of those humiliating experiences unique to the awful middle school years.  I was always relieved when gym class moved out of the weight room and into the swimming pool.  Swimming was the great equalizer for me.  I was still awkwardly skinny in my suit, but I had grown up in the water.  I was an excellent swimmer and eagerly used every opportunity to show it.  Swim the length of the pool?  No problem.  Do it entirely underwater?  Sure.  Use the diving board?  A perfect opportunity to show off my perfect diving form.  The pool - and to a lesser extent the basketball court - was where I was able to feel like I was not only not the worst in the class, but one of the better ones.

At the end of each class session, we were usually given 10 to 15 minutes for "free swim".  For most kids, this meant hanging out in the shallow end and splashing each other.  I, however, was determined to use this time to impress upon everyone exactly how talented a swimmer I was.  I headed to the deep end of the pool with the few other brave souls and dove in time after time.  As exhilarating as this was, it didn't take long for me to become aware that my extraordinary diving feats weren't being given the attention they were due.  The majority of the kids were still down in the shallow end, oblivious to the mastery being exhibited.  This would not do.  If they wouldn't acknowledge me in the deep end, I was bringing my talents to the shallow end.  Diving was (with good reason) strictly forbidden in the shallow end, but I had done it several times before and know how to "shallow" dive.  I lined up at the shallow end of the pool, performed a series of exaggerated stretches to draw attention to myself and dived gracefully in.  Gracefully, that is, until I smacked my nose square on the bottom of the pool.

Immediately I knew I had messed up. Big time.  I surfaced and through eyes quickly clouding over with tears, looked around to see who had witnessed my humiliation.  Amazingly (although in retrospect, maybe not so amazingly) nobody seemed to notice.  All the other kids were going about their business.  I had escaped the ordeal without embarrassment.  Relieved and determined not to break down in tears, I decided to head to side of the pool and regain my composure.  My brilliant stealthy getaway was quickly blown, however, by a scream of the incredible decibel level and pitch that only middle school girls are capable of.  In my dazed and embarrassed state, I had failed to notice a small but quickly growing pool of bright red water surrounding me.  Unfortunately, the macabre scene didn't go unnoticed by others.  The first scream was followed by several more and soon after by the shriek of our teacher's whistle and shouted instructions that everyone must exit the pool immediately.  I held on to the last shreds of my dignity, hoping that I was far enough away from the mess that it couldn't be traced back to me.  The horrified looks of my classmates as they saw my flattened and slightly bent beak spewing blood quickly ended all hope of evading notice.

Class was called early and the other kids were sent to the locker rooms to get changed.  I, on the other hand, was afforded to opportunity to add insult to my injury as I was paraded through the hallways to the nurses office wearing only my swimsuit and with half a box of Kleenex stuffed in my nasal cavity.  Needless to say, I wasn't allowed to participate in the rest of our swimming unit and was stuck on the sidelines until the class was on to a much more humiliating exercise, like pull-ups (my record was one).  Looking back, I was fortunate to only injure my nose considering the horror stories that exist with diving accidents.  I'm not sure if my nose was actually broken as - once the bleeding stopped - the only visible sign of my youthful indiscretion was a small bump, but I can distinctly remember the pain that would resurface far too many times later in life.  I'm pretty sure I even successfully hid this incident from parents (I was pretty adept at selective sharing of what I was up to when I was younger) as my mom has no recollection of it.  I didn't know it at the time, but I had only scratched the surface of my nasal adventures.