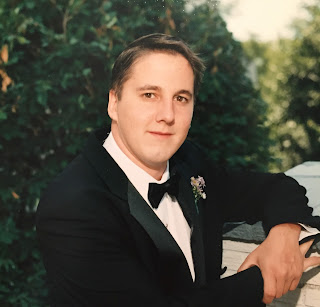 True story - My nose and I have always had an adversarial relationship, part three in a four part nose flattening thriller.

This story isn't so much an "incident" as redemption gone terribly wrong.  I had broken my nose a couple more times between seventh grade and age 23, all basketball related and none particularly noteworthy.  None of the breaks were serious enough that I sought more in-depth medical attention than having an overworked school nurse stuff some gauze up my nostrils and placing an ice pack on my nose.  Doctors generally weren't used in my household growing up.  My mom was an X-Ray Technician and had seen a career full of people coming into the emergency room for the most ridiculous of reasons.  Her reasoning, which makes perfect sense, was why pay an exorbitant fee and wait several hours in an emergency room for a doctor to simply verify something you already knew was broken was broken?  So, unless it needed a cast, we simply dealt with it.  Fingers, toes and noses weren't serious enough to require a doctor's visit.  (Side story:  One time in high school when my parents were on a fishing trip in Canada, I had pushed Brian a little too far and he was chasing me around the house in a violent rage.  I, as was my protocol, ran into the bathroom and locked the door.  Safely behind a locked door, I heard a loud thud followed by Brian screaming he had stubbed and broken his toe and I needed to drive him to the emergency room.  I called bullshit for a good 10 minutes before finally opening the door a crack so he could prove it to me.  He wasn't lying - his little toe was pointed at a macabre 90 degree angle from the rest of his foot.  We called a temporary truce to our hostilities and I drove him to the emergency room, where it played out exactly as my mom told us it would.  We waited for a few hours, the doctor looked at his toe, said, "Yep, it's broken.  You should probably stay off it a while."  He then gave Brian some ibuprofen and a hefty bill.  When my parents called the next day to check in on us, we explained what happened and were lectured for the rest of the call for making the egregious error of racking up a hospital tab for a measly broken toe, and the littlest toe at that).

In November of 1993, Kate became tired of my constant snoring, choking and gagging every night as my natural instinct would kick in after I fell asleep and I would attempt to breathe through my nose.  While conscious, I was aware of the futility of nose breathing and would intake my oxygen through my ever agape mouth, but as soon as I fell asleep I would start (trying) to breathe through my nose again.  I was aware I had broken my nose in the past, but attributed my breathing issues more to ever present allergies than a badly aligned nose.  So, I made an appointment and went and saw an allergist.  He gave me a thorough examination, poking and prodding my skin testing for various allergic reactions.  After about an hour, he informed me that I did indeed have a few different mild allergies that could be contributing to my difficulty breathing.  What was a bigger culprit, however, was the fact that my septum had deviated to the point that one of my nostrils was entirely blocked off, allowing no air in or out of half of my nose.  He could prescribe allergy medicines, but it would probably make more sense to have my nose fixed first and see how much of a difference that made.

So, after spending a few weeks convincing my insurance company that this was not a cosmetic procedure (I'm vain, but not vain enough for a nose job), I scheduled the surgery.  It was perfect timing as we were getting married the following July and I would have a nice, new, beautifully straight beak for the event.  The surgery was a same day procedure, meaning KT dropped me off in the morning and came back several hours later to bring me home.  It went off without a hitch, although I don't remember any of it (and never did) as I was put under for the surgery and then kept full of pain killers for the next few days.  To this day, KT doesn't hesitate to remind me that I was a complete unbearable asshole during my recovery period, going so far as throwing a petulant childish tantrum in the middle of a Snyder's Drug on the way home from the hospital because they were unable to fill my pain killer prescription.  Two days after the surgery, I returned to the doctor for a follow up appointment.  My eyes were both extremely blackened, I had a brace protecting my nose from any inadvertent bumping and I had small barely noticeable strings hanging from each nostril.  The doctor said my appointment would be a short one, so KT and Al, who was two at the time, decided to just wait in the lobby for me.  Thirty minutes passed.  Then sixty.  Then ninety.  Finally, after two hours, a nurse informed KT that I could be taken home, but would probably need assistance walking to the car.  KT and Al went back into my exam room to find me an unnerving shade of gray, sitting motionless in a chair in the middle of what looked to be a crime scene.

Unbeknownst to me, the two "little strings" that were barely hanging out of my nose were attached to two much larger tampon-type devices which were crammed into my nasal cavity so far that I wasn't even aware they were there.  When I sat down on the table for my follow up appointment, the doctor casually asked me how I was feeling.  Before I got a chance to answer, he gripped the two little strings and with a quick snap of the wrist, ripped the "tampons" out of my nose.  I was caught totally unaware and gasped as I saw the size of the objects that had previously been shoved up my nose.  Then, I briefly noticed the blood flowing out of my nose like a wide open tap before blacking out.  When I woke up, I was lying on a table surrounded by a few agitated orderlies attempting to clean up more blood than I had ever seen before in my life.  The doctor, noticing I was conscious, chuckled softly and said something along the lines of "Well, that was a bit more blood than I was anticipating".  He proceeded to tell me that despite being covered in blood, I looked great and the surgery had been a success.

He was right.  A few months after the surgery, I was able to take the brace off and was dumbstruck by how beautiful my nose looked.  It no longer took a curving "S" route down my face but instead was a straight line top to bottom.  KT marveled at how wonderfully silently I was sleeping and I had to admit I was waking up feeling more refreshed than previously.  We were now into Spring, which meant the outdoor basketball courts were up and running nightly.  I was itching to start playing again as between the surgery and not being able to afford a gym membership, it had been several months since I played last.  My brother, cousin Todd and his friend Matt all lived nearby and we had made a habit of going to Linden Hills Park in Southwest Minneapolis three to four nights a week to play.  We were young, tall and in shape at the time so we put together a pretty formidable team and more often than not got to keep playing until we decided we were finished (winner's always stayed on the court until they were beaten).  My nose was still a little tender to the touch, so I put my nose brace on before the first game of the season and hit the court, excited to get back to my pre-surgery routine.

The nose brace lasted a half a game.  It was bulky, uncomfortable and blocking my vision.  Additionally, I was (am) superstitious, so when my first several shots clanked off the rim rather than going through the net, I whipped of the brace and threw it to the sidelines.  I vowed to be careful, settling for jump shots and keeping out of the lane where elbows flew.  The only was I was (am) a terrible outside shooter.  My basketball skills were centered around patrolling the lane, throwing my weight around (I was no longer scrawny) and grabbing rebounds.  So, before I knew it, I was mixing it up in the paint, we were winning games and all was right with the world - until it wasn't.  On about our fourth game of the night, I was matched up against a giant of a man whom I had battled many times before.  He was a very friendly guy and we got along great, but on the court we absolutely pounded on each other.  He had not been playing basketball for long - and never more organized games than playground ball - and thus wasn't fully aware of some of the do's and don'ts on the court.  One of the big don'ts, especially in playground ball, is throw your elbows around.  Unaware of the unwritten rule, however, this guy would leap for rebounds and come down with his elbows fully extended and swinging.  He wasn't doing it maliciously, he just didn't realize the peril he was putting everyone else (including his own teammates) in.  As I'm sure is apparent by now, I caught one his monstrous elbows, square on the bridge of my nose.  It made a sickening squishing sound and game stopped as my teammates were immediately aware of the gravity of what just happened.  I grabbed my nose, expecting blood to be rushing out and was stunned to find only a small drop or two leaking out.  I let out a big sigh of relief, thinking I had avoided a catastrophe.  I looked over at Todd to show him I was ok and saw his jaw drop and face turn white.  Even though my nose wasn't gushing blood, it was pointing slightly towards my ear rather than straight down to my chin.  I excused myself from the game and rushed home the few blocks to our apartment to see the damage for myself.  When I arrived home, I told KT that "I might have broken my nose again" and asked her to take a glance.  She looked up at me, slowly shook her head and covered her face with her hands.  It was an action I would see her repeat a few more times over the years.

My septum was once again blocking an air passage and my picture perfect wedding nose was ruined. Neither insurance nor KT were going to allow me to have the procedure again so I was back to the mouth-breathing snorer I was destined to be.

Next time - Broken ego or broken nose - which would I choose?
Posted by Paul at 2:20 PM