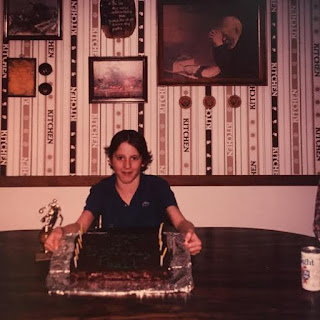 True story - My nose and I have always had an adversarial relationship, part two in a four part septum shattering drama.

One year later, my nose had fully recovered from the "shallow end of the pool" incident.  I was now a year older and in seventh grade, but physically nothing had changed.  I was still a runt, the proverbial 100lbs. soaking wet.  The photo is from my 12th birthday, but it gives an idea of my less than imposing physique (Side note - this photo could be a story in itself from the Old Style Light in the corner to the wallpaper clearly identifying where in the house you were to the "Grace" painting that every good Minnesotan Lutheran family had hanging in their house, but I digress).  Although my body hadn't changed much, my mind certainly had.  I had morphed from a (mostly) sweet, innocent kid into a complete insufferable asshole.  I didn't realize it at the time, of course, but having had experience later in life with kids that age, including my own, I can comfortably state that all 7th graders, particularly those with "outdoor plumbing" are complete assholes.  Most grow out of it, thankfully (I like to think I did), but at that age they are completely unbearable.

As a seventh grader, it is incumbent upon you to make others miserable.  It is as naturally instinctive as eating boogers as a toddler or cracking open a beer at 12:01PM on a Saturday for a middle age man.  Because of my size, I couldn't use my new found assholism to physically make other people miserable.  The only person I dared get physical with was my brother who was either too patient (possibly) or as physically unimposing as me (more likely) and didn't give me the proper pummeling I so richly deserved.  Our "fights" usually consisted of me sneaking up on him while he was reading a book (Brian was always reading a book, so this wasn't difficult), delivering a few quick blows to his stomach or trick knee (a blow to the right spot on his knee left him howling in pain for a good 30 minutes) and then quickly locking myself in the bathroom until he became too bored for retribution.   On the rare occasions he was able to retaliate, to his credit he always abided by the unwritten rule that no punches were allowed above the neck.

So, unable to physically torture others, I instead turned to verbal torture.  I'm unable to give examples of the acerbic wit I unleashed on others (this was more than 30 years ago), but I can imagine they were about as clever as you would expect from an asshole seventh grader.  One person in particular received an pretty hefty share of my verbal assholism.  I can't remember his name - even scouring through my old yearbook wasn't able to bring it back - so will call him "Scott".  Scott was a year older, in eighth grade, but wasn't much bigger than I was.  I don't know why I chose Scott to unleash my assholism on, but can only guess it was because I didn't see him as much of a physical threat, which was rare for me.  I do remember going out of my way to insult, tease, pester and generally torture the poor kid though.  I also remember that I was smart enough (or, more appropriately, cowardly enough) to only unleash my verbal torment when I had a full backing band of friends who would laugh each time I let my inner asshole shine.  Scott may not have been bigger than me physically, but mentally and emotionally couldn't have been more different.  Rather than lob insults back my direction or ask a teacher to intervene, he silently took it without reacting.  Which, of course, I took as an invitation to continue my behavior (remember, I was in seventh grade and seventh graders are assholes).  For weeks on end, I was an unrelenting dick to this poor kid - until the day Scott had finally had enough.

We were in shop class together (excuse me, Industrial Arts), which allowed a loose enough class structure that the students were able to interact with one another without being told to shut up and pay attention.  I had been bugging Scott since the opening bell and was still unleashing insults when the final bell rang.  I was so deeply involved in being an asshole that I took no notice that my supporting group of friends had become bored with my game and were already out the door on the way to their next class.  It was then that I noticed a not so subtle change in Scott.  Instead of just shrugging off my words, he turned and stared at me with a seething hatred in his eyes that I hadn't ever seen before.  I was shocked and frightened and became more so when I realized that apart from Scott and I, the classroom was completely empty.  My bravado gone, I gathered my items and headed for the exit.  Scott, undoubtedly seeing his opportunity, blocked my way.  Before I knew what had happened, Scott delivered a beautiful round house punch square to the bridge of my nose that sent me sprawling across the room.  I blacked out briefly and then pretended that I was dead in the hopes that he wouldn't continue my much deserved ass-whooping.  When I dared open my eyes again, Scott was gone and I was alone with my pain, blood and humiliation.

As mentioned in the "shallow end" incident, I was pretty good about keeping things from my parents.  This time, however, that was impossible.  I arrived home from school with a gash on my nose and two black eyes.  My mom noticed immediately and asked what had happened.  There wasn't a chance in hell I was going to explain that I had been a mouthy little shit and gotten what I deserved, so I explained it away to an errant elbow at a playground basketball game.  I'm not sure if she bought the story or not, but let it slide either way.  Scott, to his credit, never spoke to me or even looked at me again.  The momentum was undeniably all his and I was completely terrified of him. He could have easily spent the rest of the year forcing me to turn tail every time I saw him.  Instead, he acted as if he had never seen me before.  I never thanked him at the time, of course, because I was too afraid to come within 100 yards of him.  As I have grown older and my assholism has faded, however, I think often of the debt I owe this kid.  Not only did he teach me a valuable lesson about the consequences of being an asshole, he let the lesson speak for itself and didn't continue to make my life miserable, as easy as that would have been for him.  So, Scott, wherever you are, thank you for breaking my nose.