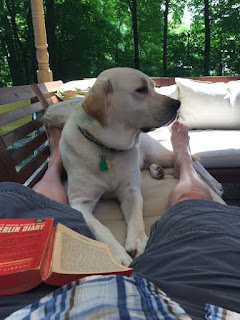 Subject is not as innocent as he seems

True story:  I learned last week that Carson is full of shit.

In the three months that we have had Carson, we've learned that he is exceptionally large and equally as clumsy.  He has refused to go either up or down the stairs in our house, content with just hanging out on the main level of our house.  We've always attributed his reluctance to clumsiness.  Even going up the four stairs to our door from outside, Carson requires backing up a few steps, getting a head of steam and more or less just lunging himself at the stairs and hoping his giant paws find solid ground underneath him.  Things like stairs - or heaven forbid jumping - are definitely not in his arsenal.

Which brings us to last week.  I had some vacation time to burn and KT did not so I decided to take the dog, a stack of books and enough whiskey to fill a small swimming pool and head to the woods for a week.  It was a beautiful vacation of no deadlines and no responsibilities.  I had even constructed a small perimeter fence outside of the camper and deck so that Carson would have a little bit of freedom to wander and use the facilities.  The fence was only a few feet high (see photo), but more than enough to keep the clumsy oaf contained.  The campground was virtually empty and tucked backed into a remote corner as we were, we saw nor heard anyone else. 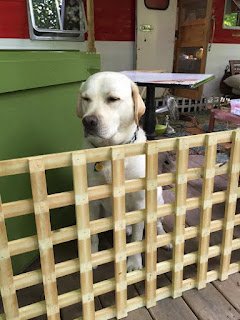 By Tuesday, I had decided that there really wasn't a point in wearing my hearing aids.  I wasn't talking to anyone, nobody was talking to me and Carson and I learned to communicate non-verbally.  It was also quite warm and so I let my normal self body-shaming slide and was laying reading with a pair of shorts on and nothing more.  I was as content as could be and Carson, although maybe a bit bored, seemed happy laying on the outdoor couch next to me and snoozing the afternoon away.

At some point in the afternoon, Carson lifted his head abruptly and cocked his ears, listening intently.  I heard nothing of course, as my earhorns weren't in but wasn't alarmed as Carson had taken quite an interest in the chipmunks and red squirrels scurrying around.  I glanced at him briefly and went back to my book.  A few seconds later he rose and headed towards the temporary barrier I had erected.  Still not alarmed - this was Carson, after all, who once couldn't make it from one room to another as there was a four-inch tall box blocking his way - I continued to read.  After a bit, I noticed his tail started whipping in counter-clockwise circles at about 400 RPMs.  I couldn't see what he was looking at, as his line of vision was around the corner, but I decided to investigate.  As I approached where he was standing, Carson decided that what he had spied was far too exciting to risk my ruining it.  He put one foot up on the fence and without the slightest hesitation, hurdled the fence with all the grace and agility of an equestrian horse.  Upon landing, he tore off down the small gravel road that led to our site.

I quickly (relative use of the word quickly here as I had been stagnant for several hours and had some whiskey in me) followed him, tripping over the fence he so adroitly scaled just moments before.  Regaining my balance, I turned the corner to see where he had run off to and came face to face with one of my biggest fears.  About 150 yards down the path sat Carson right in the middle of two moms and four or five early teen girls soaking up their love and adoration and endless petting.

I quickly yelled apologies for his intrusion and demanded Carson return at once but there was not a chance in hell he was interested in returning to the soul-crushing boringness I was offering when this all-inclusive fawning was an option.  So, barefoot, shirtless and deaf I started hobbling down the path to retrieve him.  I don't go barefoot often as I have sensitive skin on the bottom of my feet (pussyfoot as KT calls me) so I didn't so much as run to Carson but awkwardly hobble towards him, cussing silently (or maybe not silently, my hearing aids weren't in) each time a rock dug into my precious feet.  After about 45 seconds I finally reached the congregation and got a hold of his collar.  I apologized over and over, realizing that if I stopped talking I would need to explain that I didn't have my ears in and thus couldn't easily respond to anything the by now head-over-heels in love (with the dog, not me, but I probably don't need to elaborate that) group of ladies said.  So, I grabbed him and headed back towards our base.  Carson, as he tends to do when being asked to go somewhere he doesn't want to go, put on the brakes, steadfastly refusing to move.  I offered promises of his ball, bananas and cauliflower, but none were enough to entice him.  Instead, it was 95 pounds of passive resistance flopped down in the middle of a group of females who by this time must have been incredibly confused by the barely clothed man who kept talking and not responding to them.  After what seemed like an eternity, I was finally able to scoop up the shapeless mass and with promises of dinner, drag him back within our confines, where I quickly began constructing a more impenetrable line of defense.  It was only after I had been back for a few minutes when I realized that on top of my other embarrassments, my fly had been down the entire time.

The girls didn't stay at the campground long - only about thirty minutes - but I can only hope their encounter wasn't what kept them away.  We spent the remainder of the week without incident, thankfully, but I will never again believe the sad eyes Carson deals out when we invite him to join us downstairs.
Posted by Paul at 2:51 PM