Last Thursday, we shipped the kids off to Arizona with grandma for the weekend.  Excited to have house to ourselves, KT and I took Friday off work.  We had no plans, no commitments and no itinerary for three days.  It was awesome.  That being said, by Friday at 10:00, we were bored.  Determined to make the most of our time, we hatched the brilliant plant to make grape jelly using the concord grapes that have been growing like Audrey Two from Little Shop of Horrors for a few years in what used to be our garden (we now prefer to call it "native habitat").  We researched recipes and realized we needed a sieve to continue our project.  Determined to do this on the cheap, we set off to the local thrift shop to see if we could score one.  This was convenient, as the liquor store was right next door and I was already several hours late of a buzz considering the whole three day weekend thing.

So, after determining there wasn't a sieve, we decided to make our normal rounds through the store.  KT meanders through clothing, knick-knacks and pillow cases (?) while I flip through the t-shirts and check out the books.  When I was halfway through the book aisle, KT came bounding towards me, heels kicking high and arms flailing.  "OMIGOD OMIGOD OMIGOD!  I found an EMMALJUNGA!  You HAVE to come look at this!!!".  Intrigued, as I had not a clue what an Emmaljunga was, I followed.  Turns out an Emmaljunga is a baby stroller.  KT would have none of my less than enthusiastic reaction.  "You don't understand.  We HAVE to buy this.  You can't even buy these in the United States.  EVERYONE in Sweden has one and it's only $30!  We HAVE to buy this."

"But," I countered, "our children are grown.  We just sent them on a plane to Arizona.  We aren't having more children.  I don't see the need."  KT would not be denied.  "It can be for our grand-babies.  We can lend it to people.  I can clean it up and sell it.  It's Swedish and thus the most awesome baby stroller ever invented and we are buying it."  Case closed.  We loaded the stroller into the car and headed home.

Once home, KT set to work immediately, furiously scrubbing and polishing the stroller, shaping it up to the point that I had to admit it was a fine looking piece of machinery.  She then dove into internet research, proving to me that indeed you can't purchase an Emmaljunga anywhere in the United States and that they do sell for quite a bit more than we paid for it.  Humbled, I apologized for my hesitation in purchasing it and assured KT I would never question her in a thrift store again.  All was well with the world, we were at peace.

Flash forward a few hours.  I was diving into one of my new books while KT was in the other room, still putting the finishing touches on her new investment.  I was absorbed in my book, but became vaguely aware of KT humming or singing.  I wasn't alarmed, but found it peculiar as she isn't normally prone to these habits.  As it continued, getting gradually louder, I recognized the tune.  She was performing the music from the opening credits of Rosemary's Baby.  The creepy "la la laaa la, la la laaa" tune.  I had to investigate.  It was as bad as I thought.  KT was pushing the stroller around the room, eyes glazed over.  She was, of course, doing it merely because she knew I would freak, but it worked.  I asked, begged, pleaded for her to stop, but that only encouraged her.  "I miss my babies, la la laaaa, la la laaa.  Aren't you excited for us to be empty nesters?"  I knew my only hope was to ignore her.  Luckily, I'm pretty good at that. I went back to my book, gritting my teeth and pretending I wasn't disturbed.  In an inspiring display of determination, she continued the act for nearly 20 minutes.

Finally, satisfied the nightmare was behind me as the maniacal la la la had stopped, I ventured back into the room.  This is what greeted me: 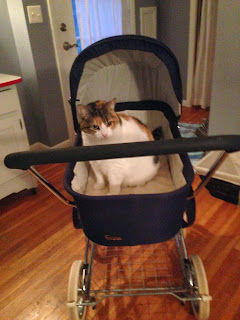 Followed immediately by KT whining, "Paul, I miss my baybeeeees!!!!"

I truly fear for our future.  Oh, also, the damn birds ate our grapes, so the great jelly experiment was a flusher.
Posted by Paul at 9:05 PM