And how was your week?

Audrey is on a five day roll of epic proportions.  Witness:

Thursday, May 17th - Audrey gets selected to the National Honor Society.  A magnificent accomplishment, especially considering her parental influence.  I didn't get bad grades, necessarily, but the closest I got to the NHS was when Apple Valley High School accidentally sent Brian an application two years after he had already been accepted as a member.  My logical deduction was that they had simply mixed up the names and this was meant for me.  I diligently began filling it out, even starting the "you're not so damn smart now, are ya?" taunt to Brian.  A quick phone call to Marilyn (my aunt), who was a secretary at the school, cleared matters up, however.  I definitely was not being invited to apply.  And KT...well, we love KT.  Audrey, however, is a completely different story.  I can count on one hand the number of times I have had to tell her to do her homework since she began school.  She just does it.  And she does it well.

She got the letter inviting her to apply about 10 days before the application was due.  We congratulated her and told her we would look over the application with her later.  We then filed it within our 43" inch (and growing) stack of "important stuff we really gotta take care of".  And there it sat.  Fast forward nine days, 8 hours.  Audrey calls me at 10:35 at night.  I'm in bed and she is upstairs in her room.  This isn't an unusual call as she knew I was still awake and often times I will call her and ask her to let the dog out when I'm too pathetically lazy to get out of bed.  I answer and Audrey says, "Hi.  Franny just reminded me the NHS application is due tomorrow.  Don't freak out."  Right.  We look over the four page application and talk about it for 15 minutes the next morning while shoveling down oatmeal.  Turns out that in addition to the many short answer questions on the application, she also must submit a one page (typed) essay demonstrating a time she showed leadership.  She must also collect signatures from several different people and have the whole thing turned in by 3:00.  I drop her off at school convinced it's a lost cause.  For Audrey, not a problem.  She cranks it out and gets accepted two days later.

Friday, May 18th - Synchronized Swimming Sectionals.  The first day of Sectionals is the "boring" (Audrey's words) part where all the swimmers dress up in identical black suits, white swim caps and goggles and perform different "figures" for the judges.  All the swimmers do the same figures.  They aren't even announced by name, just as "Swimmer #92".  It's kind of creepy actually.  There is no talking, no cheering and no music.  Just a bunch of drones.  Audrey had 51 swimmers in her division.   I asked her how she thought she did on Friday night and she said "feh".  I pushed for details and she said "it wasn't my best and it wasn't my worst".  She finished second (!), but wasn't aware of this until they did the awards Saturday.

Saturday, May 19th - Synchronized Swimming Sectionals.  The second day of the event is the fun one where the girls swim their routines.  It is an incredibly loooong day, however.  Audrey had to catch a bus at 6:45 Saturday morning.  It was nearly 7:00 PM when we got home.  Audrey swam three different events: a short solo, a trio and a team.  The results?  1st place, 5th place, 2nd place, respectively.  The top four places qualified for the State Tournament.  However, because her trio team scored high enough, they get to participate in state as a "pre-swim".  What that means is they get to participate in the State Tournament, but won't be scored.  Only one team is allowed to do this.  Despite how proud I am of her first place and second place finishes, it's the trio finish that stunned me the most.  Audrey is teamed up with a 7th and an 8th grader, both who had never done synchronized swimming before practice began in March.  Two months later, they are going to state.  The 7th grader started balling on the award stand when she realized she would be going to state.  It was pretty cool.  So, on to state we go on Thursday and Friday, where Audrey will be competing in two events and participating in a third (plus the "boring" figures). 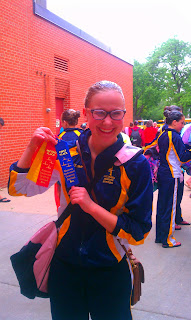 Sunday, May 20th - A day of rest.  Well, not really.  Audrey had a houseful of guests Saturday night and KT heard them in the kitchen at 3:30 in the morning scrounging for food.  When Audrey rolled out of bed about noon, she made breakfast for her friends and then she and I went out to practice for her drivers license test on Monday.  Audrey didn't feel at all ready.  She had been bugging us to make an appointment for about a week because everyone had told her that you have to schedule your test three months in advance.  So, last Thursday, KT went online to schedule her appointment.  Turns out they had a cancellation and there was an opening Monday at 3:00.  Naturally, she took it.  Audrey went into full-on panic mode.  We spent the rest of the day Sunday driving around.  After taking Al and I to our basketball game near the U of M, she drove down to Lake Street so we could have a few post game beers with Brian at a bar down there, then drove home through downtown.  I thought she did just fine driving, but she wasn't too convinced.  When we got home we spent a few terse hours in the church parking lot practicing backing into parking spots and parallel parking.  She wasn't doing too badly, but not well enough to pass her test (or so she thought and I silently somewhat agreed).  KT and I finally made her stop when we noticed she was tearing up out of frustration as she tried parallel parking for the 30th time, using her parents as cones.  I even tried doing a little preventative damage control, saying "Audrey, focus on all the good things that have happened the past few days.  Who cares if you don't pass?".  It didn't work - she was terrified, exhausted and stressed.  We went home and she was asleep within an hour.

Monday, May 21st - Drivers Test.  I couldn't get out of work today, so KT took Audrey.  She got out of school 10 minutes early at 2:30 to give them plenty of time to get up to Arden Hills for the test.  At 2:50 I got a call from KT.  She had printed out the directions on how to get to the Exam Station, but forgot them at work.  So, to compound Audrey's frayed nerves, they had now missed their exit and were in danger of being late.  I talked them through directions, however, and they made it just in time.  A side story here, but bear with me, it ties in:

KT has a friend named Ann from work.  Ann is Swedish, only moving to Minnesota after getting married to a guy from here.  She returns to Sweden frequently to visit friends and families.  Lucky for me, Ann usually returns from Sweden with a little gift for me (or maybe for KT, but I usually benefit from it).  She brings back aquavit or other Swedish liquors that you can't find her.  It's awesome.  This time, she brought back a little bottle of Punsch, which is a liquer - kind of like a schnapps.  It has a really strange taste - I can't really describe it - but it is delicious.  Ann gave KT the bottle today and KT brought it home, knowing how excited I was.  Only, she didn't go straight home - she went to pick up Audrey to bring her to her test.  Ok, back to the story...

When you get to the license station, you have to pull up to an info booth to sign in and get instructions.  As she is pulling up, KT realizes there is a bottle of booze in the car and that probably wouldn't look great as a sixteen year old takes her license test.  So, she determines the best possible solution is to quickly hide it out of view, get past the info booth, then put it in the trunk for the test.  A solid plan in theory, but in the chaos (or KTaos) that sometimes seems to follow her, that isn't how it played out.  While reaching for the bottle, KT ran up onto the curb while pulling up to the info booth window.  So, now she is on the curb and really close to the window.  Then, while reaching into the back seat to stash the bottle, she leans against the horn and begins blaring the horn at the attendant in the booth.  The attendant said to Audrey - and I'm not making this up - "Are you sure we don't want to give mom a test while we are here, too?".

After that fiasco, they pull up to wait their turn and Audrey instructs KT to get out of the car, but not wait outside.  She wanted her to wait inside so Audrey wouldn't be able to see her.  Turns out the only place for waiting inside was in a narrow hallway right next to the bathrooms.  Also, there wasn't really a chance to open the trunk, so KT stashed to bottle of liquor in her purse.  So, while the daughter is out beginning her test, the. mother is standing outside the bathrooms with a bottle of booze in her purse.  Audrey goes through the course, pulling back into the lot after about thirty minutes.  As Audrey tells it, "the examiner began telling me all the things I did wrong.  Then she said, 'But, you passed'."  KT texted me and told me she passed.  I texted back, "you have to be f***ing kidding me" (sorry mom).  Then I thought about the past few days and texted her again, "actually, why should that surprise me at all?"

This evening Audrey drove alone for the first time as she drove to the school for the Carnival that she was obligated to host as a member of Student Council.

I'll update this email tomorrow when she cures cancer and solves world hunger.

So, how was your week? 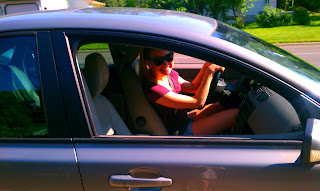