Yesterday I undertook the gargantuan task of finding my Social Security card.  Or, more accurately, I undertook the heroic effort of following KT from room to room as she searched for my Social Security card.  We gave up after about four hours of searching and decided I would just venture to the Social Security office today and get a new one (which I thought would be a blog worthy adventure of its own.  Turns out it wasn't - I was in and out of there in five minutes and saw nothing but pleasant and helpful people the whole time.  Damn their efficiency and professionalism!).  Although we failed to find my card, we stumbled across a box deep in the attic which contained some of my personal items dating from early childhood through college.  It contained some of what you would expect - High School graduation program, confirmation picture, basketball cards (including thirteen Sherman Douglas rookie cards - I must have figured he was going to be awesome), etc.  There were also a few more noteworthy items.  Here is an inventory:

- An envelope labeled "Paul's Teeth".  It contains exactly what you would expect.  Why I have kept my teeth for 30+ years, I have no idea.  I have a small box in our bathroom full of my kid's teeth as well.  Do other people do this?  I'm a little worried.  I can see perhaps saving a child's first lost tooth as a keepsake, but all of them?  The teeth in the envelope I discovered yesterday have no sentimental value.  They weren't my first teeth lost.  They didn't even come out naturally.  I had a messed up set of choppers when I was younger.  Think British meth-addict.  The seven teeth in this envelope were pulled out because they were growing in weird places or at weird angles.  Or at least that's what the dentist said.  In retrospect, he may have just been a sadist.

-  A white rabbit fur.  I don't know how or why I got this, but I remember my brother had one as well (his was gray).  It sat on the nightstand next to my bed and I kept my alarm clock on it.  The immediate question that comes to mind is who the hell manufactures rabbit skins?  Is there a sick farmer somewhere who raises rabbits simply to skin them and sell their hides to pre-pubescent children?  And if there is such a person, are they automatically on the "person of interest" list in all missing persons cases?  I would ok with throwing this away, but the fact that KT finds it so revolting that I can threaten her with it (really KT, I think this would look nice next to my side of the bed) means I have to keep it.

- A giant conch shell.  This didn't come from a memorable childhood trip to the ocean.  It came from a garage sale.  I think I paid 25 cents for it.  It also sat on the rabbit skin next to my alarm clock.  I have absolutely no idea why I have kept this and moved it from house to house no less than seven times.  I would dispose of it but I'm not sure if it is garbage or recycling.  Google couldn't help me on this.

- One Coca-Cola can and one Coca-Cola bottle.  When "new" Coke came out in 1985, I hoarded a bottle and can of classic formula, convinced they would be worth millions some day.  When Coke reverted back to their original formula less than a year later my plan was shot to hell.  I threw away the can yesterday because of leaking/evaportation but I'm hanging on to the bottle.

- An envelope containing corresondence from my first year of college at Gustavus.  This was back in the day when people actually wrote letters using pen and paper and stamps.  Here is a sample from one of my favorites from a high school friend who shall remain nameless:

Paul - Let me start out with a disclaimer of sorts:  I am extremely intoxicated from the hallucinatory effects of the drug THC, normally referred to as "marijuana".  In other words I'm Baked (note Capital "B").  So if the writing seems to wander a bit, don't surprised (sic); it should be good entertainment at least.


Needless to say, it was good entertainment.  Seven handwritten pages, single spaced, covering topics ranging from the Kansas City Royals to a dick down the hall that owed him $14 dollars.  At one point, without warning or explanation, the language switches to Russian and continues that way for half a page before switching back to English mid-sentence.  God I miss college.

The other favorite was this postcard my brother sent me from Chicago: It reminds me of the picture Audrey found in an old coloring book at a friend's cabin last year: 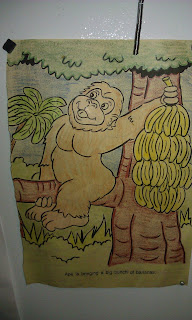 The caption reads "Ape is bringing a big bunch of bananas."  Ape also seems to be bringing something else rather large.  KT and I were bursting with pride that Audrey took the time to color it, tear it out and bring it home for us.  Yes, that is hanging on our fridge.
- A jar full of pieces from the backboard my friend Eric shattered in High School during practice one day.  It was the most awesome day of practice ever.  Back when I went to high school, hardly anybody could dunk.  We had one person on our team that could throw it down on a somewhat regular basis, but only in practice, never in a game.  That didn't stop everyone from trying, however.  The rims and backboards took a beating everyday when every player who could grab the rim (I wasn't in this group) would spend at least 30 minutes attempting to dunk.  They would inevitably miss badly, but hang on the rim for a while for the cool factor anyways.  Eric apparently held too long one time because before anyone knew what was happening he was laying on the ground with thousands of small pieces of glass raining down on top of him.  We all froze, convinced he was dead.  I can literally remember watching him lay on the ground as his face turned from the palest ghotly white to a bright shining red as he realized what he had done.  Luckily, he escaped with only a few minor scrapes.  It goes without saying that he was a celebrity for a few days.  Side note - Eric was also the guy that somehow broke a window and nearly fell out from the 7th floor of our hotel on a 9th grade band trip.  Somebody shot him with a squirt gun, he backed up and went right through the window, just catching himself on the frame before he tumbled out.  He must have developed a taste for the adrenaline as he is both a cop and fireman now.
- An envelope containing some of my "poetry" from high-school and college.  Good Lord am I a colossal douche.  I will not subject myself (or you) to an entire entry, but let me just give you a small sample:
Morning brings in the setting sun
And you sink deeper into its grips
Recovery is the ultimate setback
It is a mere illusion of the impending doom
You can be born only once
Although death is a reoccuring procedure
I was emo before it was cool to be emo.  Except I wore button-fly 501s (rolled up of course), powder jackets and Swatch watches (I found one of these in the box as well!) instead of trench coats and black eyeliner.  As tempted as I was to destroy all evidence my "dark period" and the poems that flowed out during this time, I shoved them back in the box before pushing it back into the deep nether-regions of the attic.  Someday, when my grandkids or great-grandkids discover them, it will explain a lot.
Posted by Paul at 1:04 PM